You only have to type the word ”yoga” to a search engine to get an idea on the images that are sold to us with yoga. Practising yoga is promised to bring calmness, peace, harmony, happiness and of course a perfect, toned body. Colourful yoga leggings are now fit for even formal meetings and western people make minute-by-minute plans to fit a yoga class into their hectic weekly schedule. The yoga trend doesn’t seem to be on the decline. On the contrary, yoga is constantly being talked about everywhere, and everyone including celebrities and pensioners are practising it. In addition to the many yoga studios, one cozier than the next, yoga is now being offered in every dance school, institute of adult education and service center, and new, trendy yoga modalities pop up all the time. In Helsinki schools you can find äijäjooga (Yoga for Men), Hot yoga, Aerial Yoga, Senior Yoga, Acroyoga, Beer Yoga, Rap Yoga, Maternity Yoga, Ashtanga, Kundalini, Yin and Vinyasa.

Ashtanga Yoga teacher Anni Rainio; how far from the Indian yoga tradition have the new yoga trends moved? Is there some sort of umbrella term over this multiplicity of different modalities, under which all these subcategories reside?

I believe that the different modalities are interconnected by the notion of training and mastering the mind and movement, which is performed in synch with the breath. Yoga is a holistic modality, which does not focus on training certain muscles and muscle groups or what the movement looks on the outside, but rather the focus is in feeling the body and one’s own practice. People have various reasons for starting yoga, but often the reasons to start are the willingness to improve one’s concentration, increase harmony and broaden body awareness.

You teach ashtanga yoga – why did you pick that?

Ashtanga feels most familiar to me. Its dynamic nature challenging the body and the mind got me hooked. Teaching ashtanga can be very challenging because of its very precise systematic nature. I like to teach beginners’ courses, so I can properly guide the students to get to know the basics of the modality.

Could you tell us a little about your own yoga background?

I started yoga at 14 with Hatha Yoga and moved into Ashtanga a few years later. The hobby was in an on-off state until 2015, when I found Ashtanga again while living in Nepal. I studied to become a yoga teacher in India and started to teach basics soon after. Presently my yoga practise entails a morning Ashtanga practise either at home or at a studio. Ashtanga can sometimes feel challenging, so I might need a counterbalance from other types of practises. This is why I alternate between Ashtanga and a more Vinyasa-type practise, during which I listen to my body and pick the asanas that feel good on that particular day. In addition I meditate and do breathing excercises, pranayama.

The commercialization of yoga has clearly brought yoga a massive amount of new practitioners. Do you see this as a positive thing?

The rising interest in yoga is a positive thing, but trendiness is also a cash-collecting mechanism, which I think is somewhat contradictory to the basic principles of yoga. There are yoga studios in Helsinki, which take different income levels into consideration and I also think it is good that the institutes of adult education offer affordable yoga classes. As a yoga teacher I might do some pro bono work on my own terms and in a schedule that suits me, because I think that yoga should be accessible to all. Of course it must be remembered that generally also yoga teachers need decent pay for their work.

There is a lot of talk about cultural appropriation. Even Helsingin Sanomat made a polemic heading for its yoga story: ”A Ritual of Hindu Priests Has Become a Super Popular Sport”. Is yoga about the exoticization of the Hindu tradition?”

I once asked a holy man in Nepal what he thought about me teaching yoga as a westerner. He just advised me to be myself, and did not see my background as problematic in view of teaching. The very next morning I was invited to the same temple to teach a yoga class to a group of local men. I think the conversation about cultural appropriation has become ever more important with globalisation, and it is important to know the background of phenomena. I think that things must have room to develop. For example, following all features of the Hindu yoga tradition (practising at sunrise or sunset, as an example) is quite impossible in Finland, firstly because of weather conditions and differences in the amount of light. It is also noteworthy that in India yoga has become a cherished practice of the nation only after ir circled back to its roots through the Western countries. Yoga produces good health for so many people that it should not be a practice just for a small group. Yoga teaches universal humanness, love and equality, which I think serves as a justification for the fact that all who wish to do so should be able to practise it.

What does yoga offer that other sports don’t?

You can reach the feeling of total focus in dance, paiting and anything else. In other hobbies this focus can be achieved as ”an aside”, but in yoga this is the primary goal. This state can be called by different names: zen, flow or consciousness of your own body and emotions.

Who is yoga for?

Yoga is for anyone interested in body consciousness and mind mastery. It is very good that there is such a wide selection from äijäjooga (Yoga for Men) on, so that everyone can find their own angle into it. For example ashtanga is not for everybody because of its physicality and quickish pace, but from the various yoga modalities one can surely find a one that fits.

To finish, please advertise your own classes.

Ashtanga classes are suitable for all who want to challenge themselves and increase body control and mind mastery. The ashtanga practise is quite strong and it demands some muscle tone. After Christmas there is a new beginners’ group, which you can join even if you have not practised yoga before. Advanced beginners’ class in turn is for those, who have started my classes in the autumn, or have done some Ashtanga before. On this class we continue with asanas from the primary series of Ashtanga. 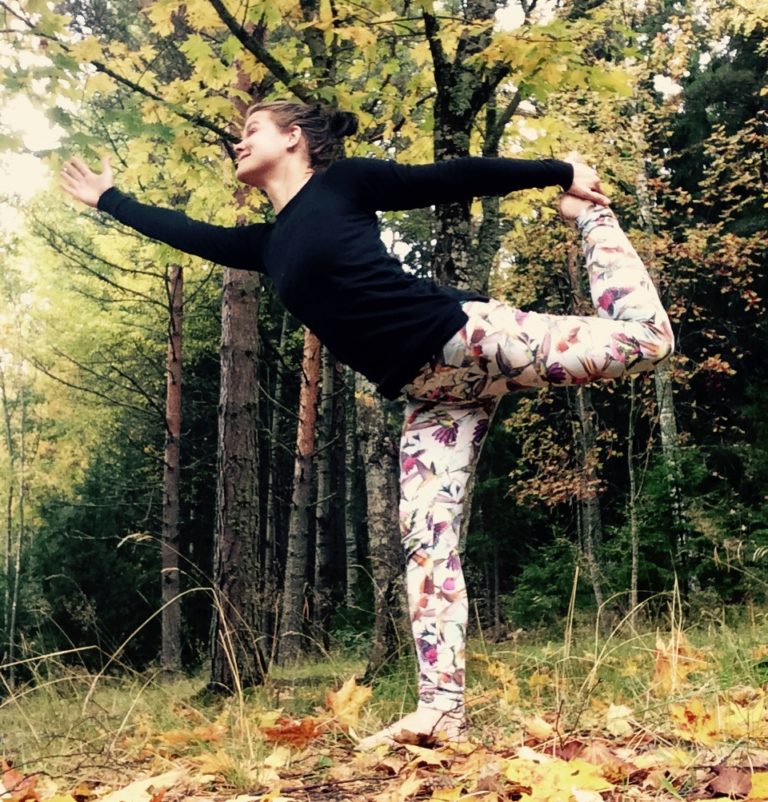